The building sheltering the monks’ cells at the Monastery of Ai Yannis Detis, is a typical traditional single-storey stone building of the Cyclades. Its conversion into a museum space was designed to host the permanent exhibition ‘Paros through Russian cartography 1770- 1775’. We chose to utilize this building despite the fact that it did not meet the standards of an exhibition space, because we believed that its beauty as well as that of the Monastery and the surround- ing area by the sea are significant advantages. From the windows of the building, between the exhibits, one can admire the Naoussa bay where Russian frigates were moored centuries ago, with modern yachts and pleasure cruisers in their place today. 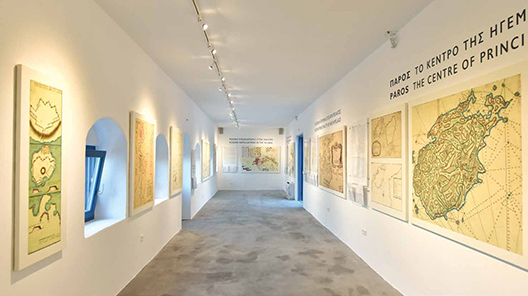 The palimpsest of history

From the Ai Yannis peninsula to Paros and the Archipelago

Since the foundation of the Park in 2009, our aim was to reveal the traces of history in this beautiful area.
On the peninsula and the bay of Naousa one can still see the ruins of Russian fortifications and the naval base, in which hundreds of vessels were anchored and crews and troops were camped from 1770 until 1775, after the bloody uprising of Greek populations in the Ottoman empire which was instigated by the Russians and is known as the “Orlofika” in Greece.
The memory of this largely unknown chapter of history is still alive in oral traditions among the people of Naoussa; fishermen avoided “setting nets in the Russian fleet”, cannonballs, coins, liturgical vessels and icons are still to be found. Local history enthusiasts and academics Yiannis Vasileiopoulos, Olympios Aliferis and Tassos Kassapides, among others, advanced historical research and contributed to the ‘Russians in the Aegean’ Conference in 2001 which was organized by the National Center of Social Research, the Ministries of Culture of Greece and Russia and the Municipality of Paros. The Board of Paros Park felt it had a duty to reveal this unknown aspect of history to the general public. A grant from the A. G. Leventis Foundation in 2012- 2013 facilitated systematic research by a team of Greek and Russian researchers of Russian, Western European and Greek archives, directed by Professor Gelina Harlafti.
A small part of this priceless historical documentation has found a home in the permanent exhibition entitled ‘Paros in Russian Cartography 1770-1775’, set up by the historian Eleutheria Zei in the former monks’ cells of the Ai Yiannis Detis Monastery which was restored with a grant from the Stavros Niarchos Foundation in 2014.
Russian naval charts and maps of exquisite beauty from the Aegean Expedition, the Naval Base of Naoussa and the Russian Hegemony of the Archipelago drawn by Russian officers are exhibited for the first time ever.
In September 2016 an International History Symposium, ‘Russians in the Aegean 1770-1775. The long term consequences of a brief hegemony’ took place in Naoussa, Paros. Historians from academic and research institutions in Greece, Russia, Great Britain, Holland and Israel participated and enriched our knowledge immensely.
Since 2018, thanks to a grant from the A.G. Leventis Foundation, a new digital platform for the history of Paros, the Cyclades and the Aegean in recent times has been set upgrade with assistance from the Institute for Historical Research of the National Research Institute, its
Director George Tolias and our own concerted efforts. All manner of hitherto unexploited material, including descriptions of places, maps, illustrations of the Greek islands will be available for academics and the general public. The digital database has already been enriched with a large number of documents, manuscripts and maps from the 15th, 16th and 17th centuries.
The Board of Directors of the Paros Park extends its warmest thanks to all those who contributed to the creation of the Exhibition, the A. G. Leventis and Stavros Niarchos Foundations and the participating scholars, in particular Gelina Harlaftis, Eleftheria Zei, Elena Smilyanskaya, Mitia Frumin, George Tolias as well as our many supporters.

The permanent exhibition "The Island of Paros through the Russian cartography 1770-1774" hosted at the monk cells of Ai Yiannis Detis monastery in Paros Park, will be open to the public during the winter season, from Sunday 11.12.2022 and every Sunday, 10.00'-13.00'.

The Island of Paros through the Russian cartography 1770-1774